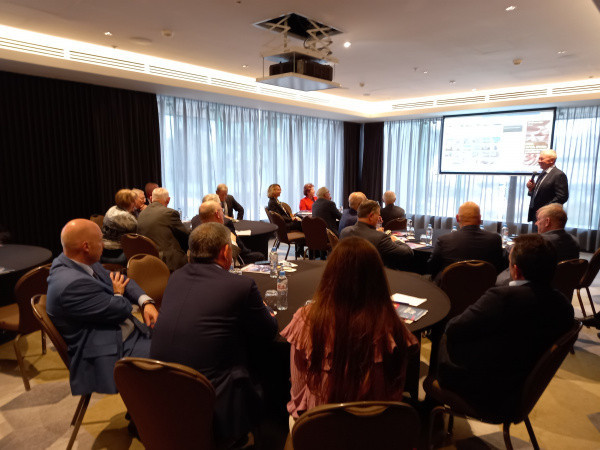 A meeting of Metal-Expo Organizing Committee members, among them heads of line ministries, industrial unions, associations and research centers for the steel industry, construction and heavy engineering of was held in Moscow on September 20.
Arrangements of Metal-Expo'2022 (November 8-11, Expocentre, Moscow, Russia) and its program were on the agenda.

The members of the Organizing Committee exchanged views on the current economic climate in the industry and prospects of the steel industry and heavy engineering development in 2022-2023. Trends in the global economy show inflation going in parallel with recession, total drop in demand and volatile prices especially for energy resources. The economic situation in China is unpredictable. A. Romanov, Co-Chairman of the Organizing Committee stated that the cost of Russian steel products is currently low, hence producers suffer difficulties with sales. According to him, more than 400 companies from Russia, the CIS and non-CIS countries will exhibit in Metal-Expo'2022. Due to the geopolitical situation and the sanctions some companies from various world  regions cannot attend the event. However, more than 20k industry professionals are expected to visit the exhibition this year.

K. Kosyrev, Deputy General Manager for Researching, TSNIITMASH, noted that 80% of the heavy engineering equipment accounted for imports; on the one hand it caused problems, on the other - much room for improvement.
B. Sivak, President of Metallurgmash stated that foundry was in recession due its dependence on imported equipment. A. Petrov, Russian Engineering Union continued that Bardin's TSNIICHERMET Institute had initiated establishing of Foundry Center.

I. Vedyakov, General Manager, Kucherenko's TSNIISK, stated that many construction projects used to be financed by foreign companies which already left the Russian market, however, large-scale projects including building of ice stadiums were financed by Gazprom and Roskosmos then.

Volumes of civil construction (reinforced concrete mainly in use) will not be reduced.  I. Tikhonov, Gvozdev;s NIIZHB, stated that reinforced concrete production volume would not be reduced, however new standards for innovative types of reinforced bars were needed. Among the leaders in civil construction are Moscow, the Moscow region, St. Petersburg and Kuban. Soon the Far East region will join the leaders due to a number of infrastructure projects implemented. V. Drevtsova, Steel Construction Development Association, noted that high-rise construction with steel-frame in use would gain popularity in the nearest future. Steel Construction Development Association will hold a number of events in parallel with the exhibition focused on popularization of metal  construction.

P. Rodin,  Pipe Industry Development Fund, reported that pipes for construction and housing and public utilities were the only segment that showed drawdown in 2022. Big diameter pipes, oil supply and gas pipes etc. on the contrary showed increased in the segment as compared to 2021.

A. Tikhonov, Bardin's TSNIICHERMENT, noted that of all its models AVTOVAZ had currently resumed production of 2 models, 600 cars a day, 300k card a year as compared to 1M cars a year before. However, some 15k materials were used in cars manufacture which stimulated production of components.

More than 50 conferences, seminars and round tables on the most pressing problems of the steel and steel-related industries will be held in parallel with the exhibition

Arrangement of Metal-Expo'2022 exposition is underway. Visitor registration is already available on the website.

S. Sobyanin, the Mayor of Moscow sent his Welcome Address to all the Metal-Expo'2022 exhibitors and visitors. The Address in particular reads: This prestigious event has gathered together for more t...

A meeting of Metal-Expo Organizing Committee members, among them heads of line ministries, industrial unions, associations and research centers for the steel industry, construction and heavy engineering of wa...